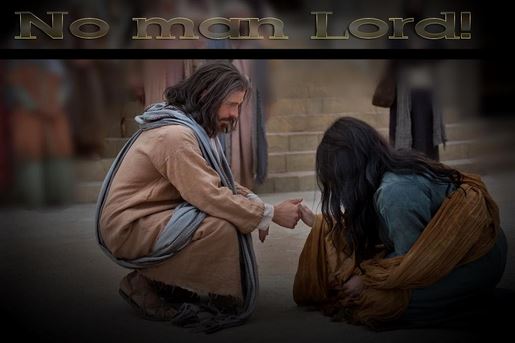 There are so many lessons that can be learned from the story of the woman caught in adultery. This week, thoughts have flooded into my mind of an aspect I never could have perceived before. In Particular, these words of Jesus. “John 8:11:.. “Neither do I condemn thee”...

What caused this woman to believe that no one condemned her? Is this possible in the presence of the Son of God? Do you think this beautiful story would exist if the woman had tried to justify herself by saying, it was these men that have now walked away that lead me into sin. That would have been reminiscent of the words  Adam spoke against his wife Eve. “The woman whom you gave me.” And how about these men that walked away? It had never crossed my mind before that Jesus was not trying to shame them by writing parts of the Torah on the temple floor, but rather longed to set them free through repentance. The same way the woman was set free. “go, and sin no more”.

What sort of love is this? All my life as I had read stories in the old testament such as the destruction of the firstborn, the one where Pharaoh would not let Israel go, I found myself having no sympathy for the Egyptians. They deserved such treatment, I judged. Hadn’t God given them enough warning? I’d never allowed my heart to picture a sobbing Egyptian mother grieving over the lifeless body of her first born. And so was my attitude to all the stories that talked of destruction in the old testament.

My heart had become hardened perhaps in part, by the brainwashing effects of Hollywood’s movies where the so called good guy, can justifiably destroy and annihilate the so called bad guy, without feeling a shred of sympathy for those deemed to be on the wrong side. Also, we share a problem of a mindset that by default looks to the faults of others. Which finds pleasure in gossip and the stories of others misdemeanours. Welcome to the nightly news, current affairs and virtually all forms of media and communications. This problem also exists in all our religious organisations but ultimately outside of all these external influences, it resides at the core of our own hearts.

So what is the cure for this curse? Well, there is another place in the Bible that speaks to the heart of this topic. Luke 18:10-14: "Two men went up into the temple to pray; the one a Pharisee, and the other a publican. The Pharisee stood and prayed thus with himself, God, I thank thee, that I am not as other men are, extortioners, unjust, adulterers, or even as this publican. I fast twice in the week, I give tithes of all that I possess. And the publican, standing afar off, would not lift up so much as his eyes unto heaven, but smote upon his breast, saying, God be merciful to me a sinner. I tell you, this man went down to his house justified rather than the other: for every one that exalteth himself shall be abased; and he that humbleth himself shall be exalted."

If I try to deaden my conscience to the sorrow others may feel as a result of their sinful actions,  and then condemn them because I deemed they deserve it, doesn’t that leave me in the same place? How could I ever believe Jesus when He says. “Neither do I condemn thee,“ and find that the picture suddenly swings in the presence of His holiness  from the speck that I saw in my brothers eye to the beam that is now in my own? And as my sin is magnified by the law, that is, the perfect character of God’s love, won’t I judge myself to be worthy of the justice I have placed upon others? Mat 7:1-2: "Judge not, that ye be not judged. For with what judgment ye judge, ye shall be judged: and with what measure ye mete, it shall be measured to you again."

I could easily allow the pain of being disfellowshipped a number of years ago over the begotten Son of God to develop into a full time desire to expose the errors and hypocrisy within the denomination. But where would that end up? Wouldn’t it be better if I have a message to share of God’s love revealed through Jesus that has transformed my heart from within? Or would I rather be busy pronouncing judgment? And though I may not have spoken out so much by pen or voice, a critical judgemental spirit has swirled invisibly in my thoughts thus stunting my ability to be a true witness for God.

Oh for the fulfilment of this promise. Rom 8:1: "There is therefore now no condemnation to them which are in Christ Jesus, who walk not after the flesh, but after the Spirit." Could this mean also what John 5:22 says?: "For the Father judgeth no man, but hath committed all judgment unto the Son:"

And Jesus said in John 12:47-48: "... I came not to judge the world, but to save the world. He that rejecteth me, and receiveth not my sayings, hath one that judgeth him: the word that I spake, the same shall judge him in the last day."

Rev 12:10: "... for the accuser of our brethren is cast down, which accused them before our God day and night."

This leads us again to the woman, caught in adultery, convicted by the law, cast at Jesus feet. The question for me is, will I allow the Glorious Old Covenant to continue to do its work? Can I have the faith of Jesus that she received?

The denial I have of my true condition is stripped away in the presence of Jesus. Away from the noise and observance of the world, the deepest chambers of my heart are laid bare before Him and as the torturous voice of my own conscience echoes in my mind, I long to hear Him say, “where are those thine accusers? hath no man condemned thee?" And to be able to say ”No man Lord” and then I shall feel the embrace of His word, “Neither do I condemn thee: go, and sin no more.” And so I shall have a message of hope to give to this world.