01 The Curse of Babylon 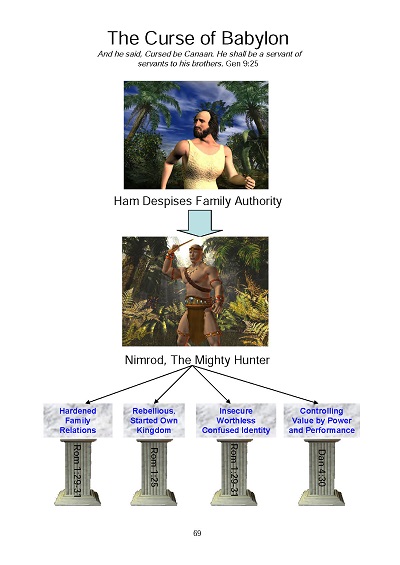 Babylon (Babel) is the name of name of the first city that Nimrod built. This city symbolises all the elements of humanity in rebellion to God and the sickening effects of the lack of God’s blessing.

God’s kingdom works on the basis of the family. Blessing and prosperity come through parental guidance and authority. When either parent or child rebel against this channel of blessing, devastating effects occur. 1 Cor 11:3 outlines the channel of blessing in the family structure. God to Jesus to Man to Woman to children. Each person receives blessings directly from God but there is a crucial blessing that comes through the family channel that binds the fabric of the community with the family kingdom of God.

Genesis 9 tell us of the sad story of Ham and his shameful and disrespectful act towards Noah, his father. Ham broke the channel of blessing and invoked the curse of Cain – a fugitive and a vagabond, forever wrestling with the chains of worthlessness and the guilt of what he did to his father. Noah, in prophetic language, pronounces the curse that will come to Ham’s family. The curse is specifically aimed at Ham and one of his son’s Caanan, who became the father of the land of Caanan which became known for its wickedness. But the curse on Ham would affect all his children and the way he related to them and treated them. As he had shown disrespect to his father, so his practises would be reflected in his children.

One of Ham’s grandsons became a mighty hunter before (against) the Lord. Gen 10:9. The strange family practices of Ham would continue in his off spring. Nimrod was obviously a disturbed young man, because he decided to marry his mother due to her influence on the people. Soon research suggests that Nimrod murdered his father to marry his mother. Such incredibly bizarre family behaviour is the last thing you want in a community leader. The sacredness of family relations was the last thing on Nimrod’s mind and his urgent need to make up for the lost blessing caused him to develop a kingdom based on performance and achievement. Nimrod built Babylon and then other cities. He then began to invade other tribes and used their resources to glorify himself. Nimrod developed a tax system, banking system and many other features that a reflected in nations around the world today. This system at its core is anti-family because it takes authority away from family and centralises it in one person or persons. The attitude of Nimrod influenced the surrounding family tribes and they also began to become warlike, kingdom based systems. The Bible says the nations have been made drunk with the wine of Babylon. This wine is the thirst for power, control and domination of those around you. It strikes at the heart of God’s family based system by removing parental authority on many issues. This system affects every one of us because we are surrounded by it. It will not end until the show down in Revelation 13 and 14 is concluded and this beastly system is taken and destroyed.