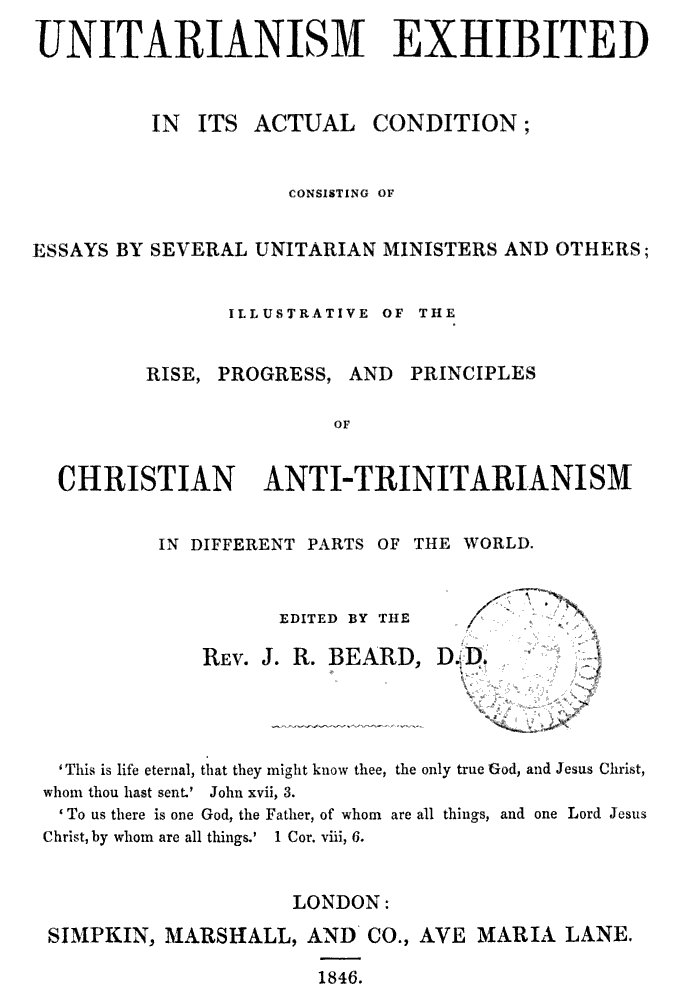 Bobbyb inspired me to investigate the Christian Connection or as it was spelled in the early 19th century 'Connexion.'  This work [don't be put off by the term 'unitarianism' but read on], published in 1846 by the British and American Unitrianism Association contained a chapter on the Christian Connexion which relates closely to the experience of many now connected in fellowship through the MaranathaMedia website.  Below is my transcription of the essential sections of the article related to the history, beliefs, and extent of this body as of 1844. I found it a fascinating mirror of my own experience. And immediately identified with the texts used on the title page of this book: John 17:3 and 1Cor 8:6.

CHRISTIANS, OR CHRISTIAN CONNEXION IN THE UNITED STATES

Within about one half century, a very considerable body of religionists have arisen in the United States, who, rejecting all names, appellations and badges of distinctive party among the followers of Christ, simply call themselves CHRISTIANS. Sometimes, in speaking of themselves as a body, they use the term Christian Connexion. In many parts of the United States this people have become numerous; and as their origin and progress have been marked with some rather singular coincident, this article will present a few of them in brief detail.

Most of the Protestant sects owe their origin to some individual reformer, such as a Luther, a Calvin, a Fox, or a Wesley.  The Christian never had any such leader, nor do they owe their origin to the labours of any one man. They rose nearly simultaneously in different sections of our country, remote from each other, without any preconcerted plan, or even knowledge of each other’s movements.  After the lapse of several years, the three branches obtained some information of each other, and upon opening a correspondence, were surprised to find that all had embraced nearly the same principles, and were engaged in carrying forward the same system of reform. This singular coincidence is regarded by them as evidence that they are a people raised up by the immediate direction and overruling providence of God; and that the ground they have assumed is the one which will finally swallow up all party distinction in the gospel church.

While the American Revolution hurled a deathblow at political domination, it also diffused a spirit of liberty into the church. The Methodists had spread to some considerable extent in the United States, especially south of the Potomac. Previous to this time they had been considered a branch of the Church of England, and were dependent on English Episcopacy for the regular administration of the ordinances.  ...  James O’Kelly, of North Carolina, and several other preachers of that state and of Virginia, pleaded for a congregational system, and that the New Testament should be their only creed and discipline.  The weight of influence, however, turned on the side of Episcopacy and a human creed. Francis Asbury was elected and ordained bishop; Mr. O’Kelly, several other preachers, and a large number of brethren, seceding from the dominant party. This final separation from the Episcopal Methodists took place, voluntarily, at Manakin Town, North Carolina, December 25th, 1793.  At first they took the name of ‘Republican Methodists,’ but at a subsequent conference resolved to be known as Christians only, to acknowledge no head over the church but Christ, and no creed or discipline but the Bible.

Meanwhile...
Near the close of the eighteenth century, Dr. Abner Jones, of Hartland, Vermont, then a member of a regular Baptist Church, had a peculiar difficulty of mind in relation to sectarian names and human creeds. The first, he regarded as an evil, because they were so many badges of distinct separation among the followers of Christ. The second, served as so many lines or walls of separation to keep the disciples of Christ apart; he thought that sectarian names and human creeds should be abandoned, and that true piety alone, and not the externals of it, should be the test of Christian fellowship and communion. Making the Bible the only source from whence he drew the doctrine he taught, Dr. Jones commenced propagating his sentiments with zeal, though at that time he did not know of another individual who thought like himself.  In September, 1800, he had the pleasure of seeing a church of about 25 members gathered in Lyndon, Vermont, embracing these principles.

Meanwhile again...
A very extraordinary revival of religion was experienced among the Presbyterians in Kentucky and Tennessee, during the years 1800 and 1801. Several Presbyterian ministers heartily entered into the work, and labored with a fervor and zeal which they had never before manifested. Others either stood aloof from it, or opposed its progress.  The preachers who entered the work, broke loose from the shackles of a Calvanistic creed, and preached the gospel of free salvation. The creed of the church now appeared in jeopardy. Presbyteries, and finally the Synod of Kentucky, interposed their authority to stop what they were pleased to call a torrent of Arminianism.  Baron W. Stone, of Kentucky, a learned and eloquent minister, with four other ministers, withdrew from the Synod of Kentucky. As well might be expected, a large number of Presbyterian members, with most of the converts in this great revival, rallied round these men who had labored so faithfully, and had been so signally blessed in their labours.  As they had already felt the scourge of a human creed, the churches then under their control, with such others as they organized, agreed to take the Holy Scriptures as their only written rule of faith and practice.  At first they organized themselves into what was called the ‘Sprinkgfield Presbytery;’ but in 1803, they abandoned that name, and agreed to be known as Christians only.  Preachers were now added to their numbers and raised up in their ranks.  As they had taken the scriptures for their guide, pedobaptim was renounced, believers’ baptism by immersion substituted in its room. On a certain occasion one minister baptized another minister, and then he who had been baptized immersed the others. From the very beginning, this branch spread with surprising rapidity, and now extends through all the western states.

From this brief sketch it will be perceived that this people originated from the three principle Protestant sects in America. The branch at the south, from the Methodists; the one at the north, from the Baptists, and the one at the west, from the Presbyterians.  The three branches rose [p. 58] within the space of eight years, in sections remote and unknown to each other, until some years afterwards. Probably no other religious body ever had a similar origin.

The adopting of the Holy Scriptures as their only system of faith, has led them to the study of shaping their belief by the language of the sacred oracles.  A doctrine, which cannot be expressed in the language of inspiration, they do not hold themselves obligated to believe.  Hence, with very few exceptions, they are not Trinitarians, averring that they can neither find the word nor the doctrine in the Bible. They believe ‘the Lord our Jehovah is one Lord,’ and purely one. That ‘Jesus Christ is the only begotten Son of God;’ that the Holy Ghost is that divine unction with which our Saviour was anointed, (Acts x. 38,) the effusion that was poured out on the day of Pentecost; and that it is a divine emanation of God, by which he exerts an energy or influence on rational minds.  While they believe that Jesus Christ is the Son of God, they are not Socinians or Humanitarians. [belief that Christ was only born a human and then given divinity; thus had no pre-existence] Their prevailing belief is that Jesus Christ existed with the Father before all worlds. (See Millard’s ‘True Messiah,’ Morgridge’s ‘True Believer’s Defence,’ and Kinkade’s ‘Bible Doctrine.’)

Bobbyb has illuminated David Millard's work and connection through the Connexion with Joseph Bates.  Then Loughborough's friendship with another Christian Connexion acquantaince.  Here are a few more for us to track down.  Now let's continue with the article...

In the Christian Connexion, churches are independent bodies, authorized to govern themselves and transact their own affairs. They have a large number of associations called Conferences. Each conference meets annually, sometimes oftener, and is composed of ministers and messengers from churches within its bounds. At such conferences candidates for the ministry are examined, received and commended. Once a year, in conference, the character and standing of each minister is examined, that purity in the ministry may be carefully maintained. Such other objects are discussed and measures adopted, as have a direct bearing on the welfare of the body at large.

They have a book concern located at Union Mills, New York, called ‘The Christian General Book Association.’ At the same place they issue a semi-monthly periodical called the ‘Christian Palladium.’ They also publish a weekly paper at Exeter, New Hampshire, called the ‘Christian Herald;’ and another semi-monthly periodical is about to be issued in the state of Ohio, to be called the ‘Gospel Herald.’  They have also three institutions of learning; one located at Durham, New Hampshire, one in North Carolina, and the other at Starkey, Yates county, New York.

Although several of their preachers are defective in education, yet there are among them some good scholars and eloquent speakers; several of whom have distinguished themselves as writers. Education is fast rising in their body. While their motto has ever been, ‘Let him that understands the gospel, teach it,’ they are also convinced that Christianity never has been, and never will be, indebted to palpable ignorance.  Their sermons are most generally delivered extempore, and energy and zeal are considered important traits in a minister for usefulness.

The statistics of the connexion, though imperfect, may probably be computed, at the present time, (1844,) as follows: the number of preachers about 1500, and 500 licentiates; communicants about 325,000; number of churches about 1,500.  There are probably not less than 500,000 persons in this country who have adopted their general views, and attend upon their ministry.

This is a much more substantial organization that I had previously imagined. They arose spontaneously from different locations and only later discovered that each had come to the same position by accepting no creed but the Bible.  The Connexion was no little matter and it experienced a phenomenal explosion by the time of the Great Disappointment.