It’s been a week since Tabernacles 2022, and for those of us in Argentina it was such a blessed event that I’d like to share about it here.

The venue was an 8-hour drive away from where we live. Why was it so far? Because this was the first time that three Father-Son ministries were in complete agreement as to all points of our understanding (covenants, feasts, character of God), and they wanted to hold meetings together with as many Father-Son believers as possible. Since these people are spread all over our large country, they chose the province of Córdoba, which is in the center of Argentina. Hopefully that made the meetings more accessible, but it was still a long drive for most of us! 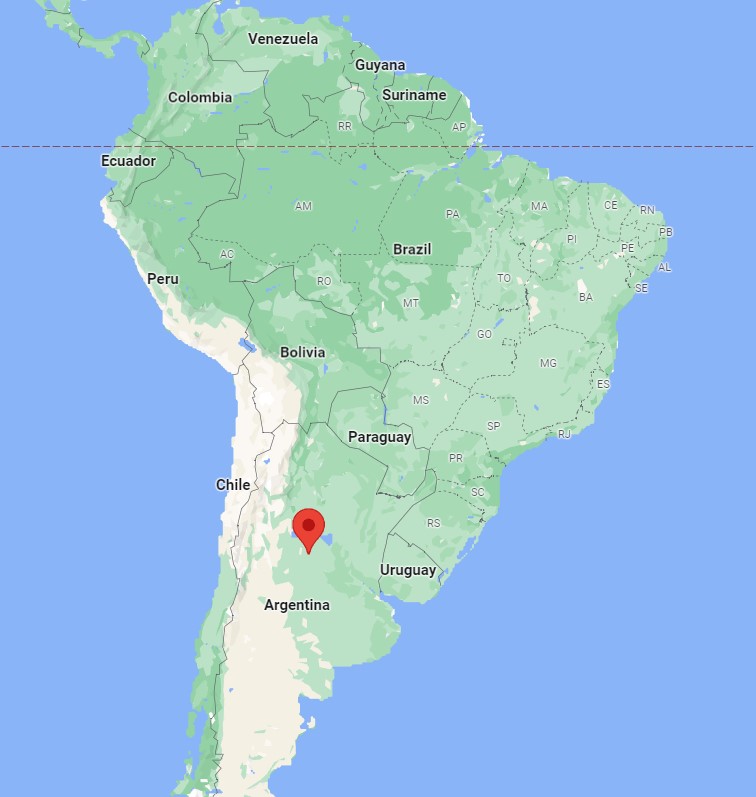 Until the day before, it seemed as though we would not be able to attend. Our car had been taken to the mechanic and it stayed there for way longer than expected, and we were only able to get it back one day before the feast. We weren’t the only ones with car issues: more than one family later told us how their cars broke down just as they were trying to make the trip to the camp. But praise God, we were all able to travel anyway and be there!

The feast was held in a peaceful Baptist camp called Campamento Bautista Thea in Villa Giardino, Córdoba. It provided enough heated cabins for all of us, and a large, comfortable meeting room as well as a smaller room for the children’s meetings.

Around 70-80 people from all over Argentina joined the meetings. We were pleasantly surprised that a group from a local Messianic congregation signed up too, their pastor included. The pastor’s wife said to me, “We’ve been keeping the feasts for 14 years, and when we heard there would be a group here, we were surprised and decided to join.” I was inspired by this pastor’s story: when he began to learn about the feasts, he was rejected from the Evangelical churches for “going back to the law”. He kept firmly following his beliefs, and leads a group that fellowships together. After Tabernacles was over, Leandro and Roberto, two of our Father-Son ministers, stayed behind with this group to study the character of God message in more depth with this precious group.

Who are the Father-Son ministers that organized this feast? In case you’re not familiar with the ministries in Argentina (which also reach other South American countries online), let me introduce you to them: 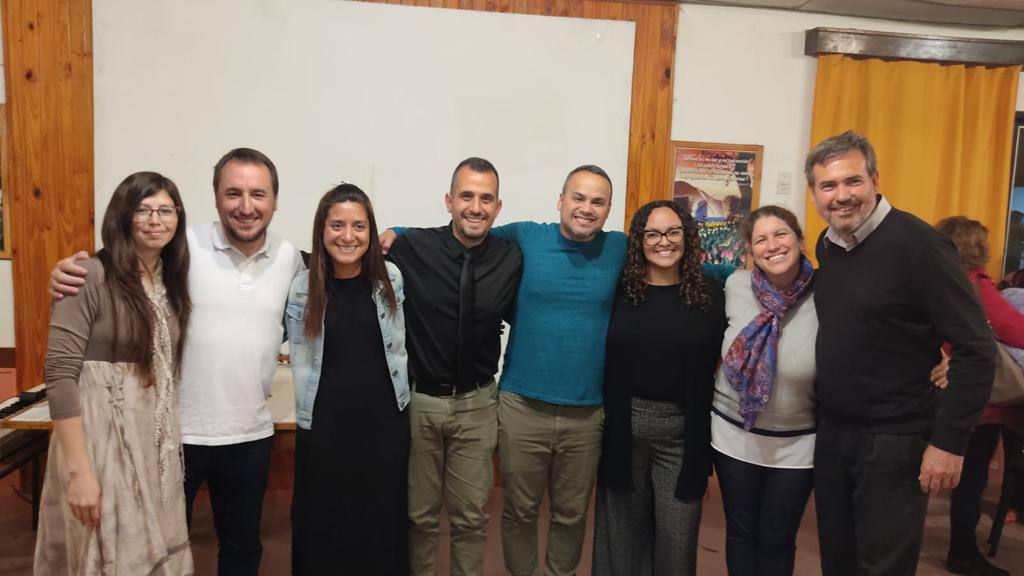 These three ministries, along with a gentleman from Mexico, Arturo Arguelles, meet online together regularly to study the Bible. They also have a joint channel, Tiempo de Reunión, in which they work together to share topics of interest (currently the Father-Son teaching, the covenants, the feasts and the character of God), as well as Sabbath School lesson studies. This is the group that planned the feast of Tabernacles together, with Daniel, Carlos, Leandro and Roberto being able to travel to Cordoba to attend and preach. They also invited Rogerio Buzzi from Brazil, as well a Daniel Baranow, a Father-Son minister and former SDA pastor from the north of Argentina, to join them in presenting topics for this feast. 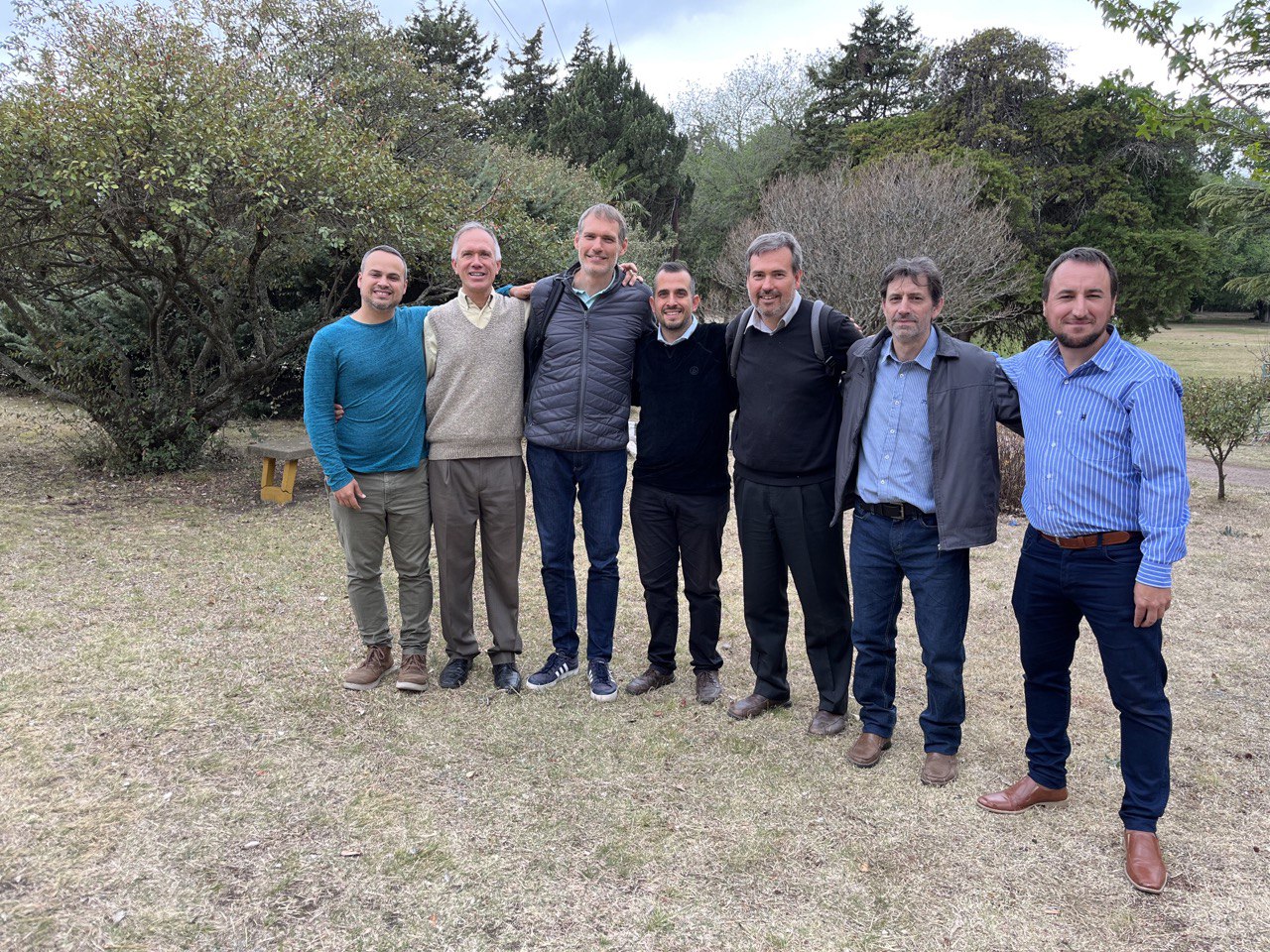 The program was carefully thought out and planned, offering a coherent thread that joined the topics together, yet it still gave enough freedom for each preacher to follow the lead of the Spirit as to what he should say. Each and every presentation (sermons and testimonies) by the six ministers was a delight. There was a Spirit of peace, joy and light throughout, and the attendees commented on that. The organizers/presenters worked together in perfect harmony, with none imposing on the others. As I watched the meetings unfold, I thanked God for this: when human pride is completely set aside, Christ can be glorified and the blessings can flow to us.

On Monday morning, one of the presenters was preaching about the covenants. As he was speaking, the people began to enthusiastically add their own comments and questions to the presentation. It was good that they were enjoying the topic so much, but the presentation had been interrupted. Rogerio Buzzi said gently, “Brothers and sisters, I hope I do not offend you with what I will say. But this morning I woke up at 3.00 am and asked God what it is I should speak about tonight, and Galatians 2 and 3 came to my mind. And now I find that my brother here is preaching my sermon! Brothers and sisters, this is what God wants us to hear today. Jesus is talking to us through this brother. Please, let’s leave our comments and questions for the end, and let’s not interrupt him anymore. Let’s listen.” My eyes filled with tears as I realized how precious this moment was. It was clear throughout the week that the Spirit of God was being poured out generously. 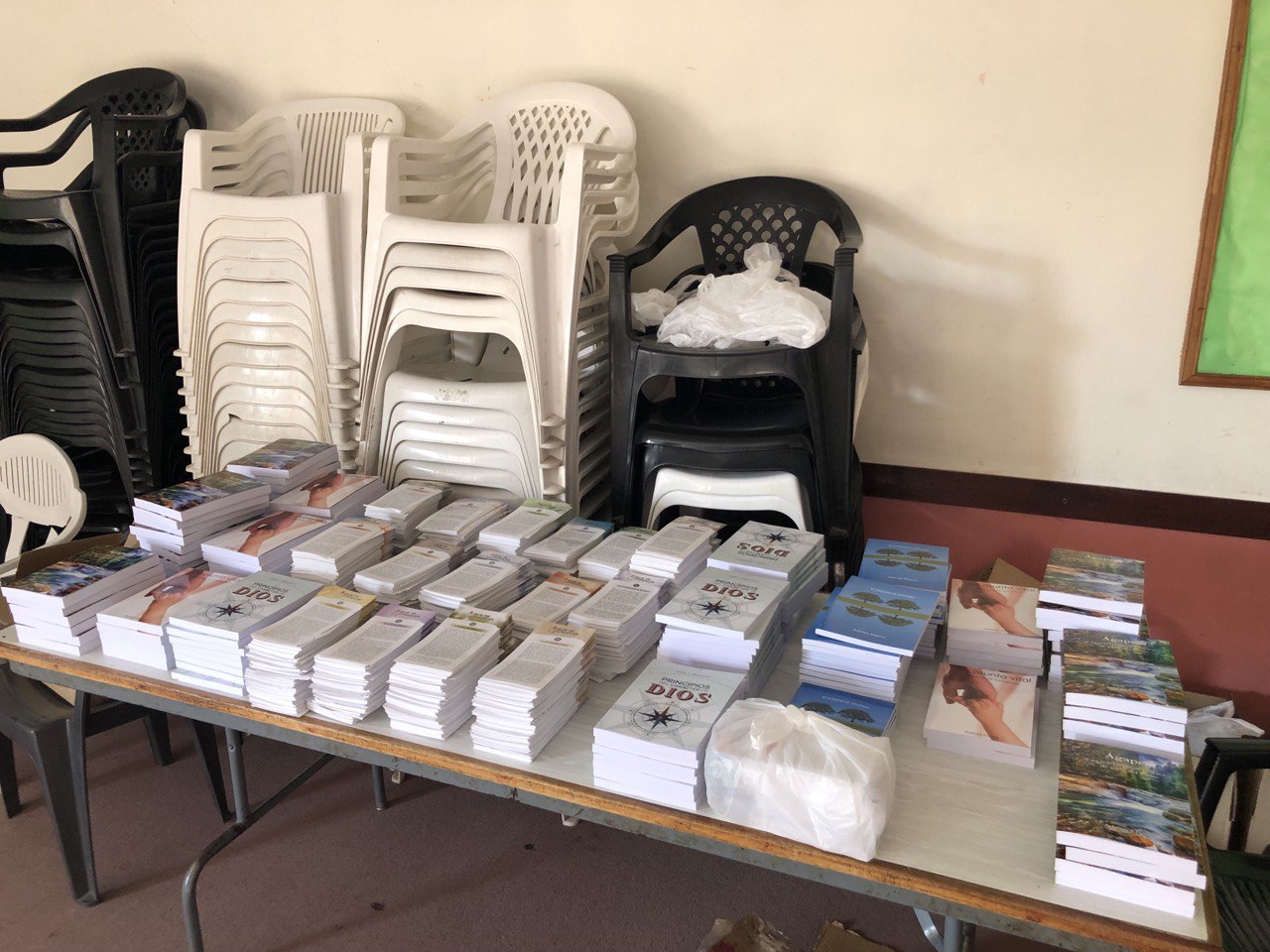 There was an attitude of love and respect towards those who doubted what was being presented, which opened people’s hearts to at least consider these things. It was not necessary for everyone to make their final decisions instantly. The books that we took were eagerly taken up: Identity Wars (there were not enough copies, and we’ve completely run out; there’s a need to print more), Life Matters, Divine Pattern and Agape. There were also tracts written by Que Te Conozcan, prepared especially for outreach. And there was the book “Principles of the Character of God”, which Daniel has just finished writing, and was freshly printed out for this feast. This book is the result of the study that Daniel, Carlos and Jonathan did with Leandro, Roberto and Arturo regarding the Character of God, and it is a good gateway book that helps to later understand Agape more easily.

At the end of the meetings, a gentleman who owns a radio ministry admitted, “I had come here ready to argue against this feast thing and this non-violent God thing. But as you can see, I have had nothing to argue against.” A young man in his twenties said radiantly, at the end of the meetings, “I used to believe that I believed that God is love, but now I know that I didn’t know!” Others said joyfully, “I’m not alone anymore!” So many of these people have been rejected by their churches and have not had a group with whom to fellowship. Now they’re looking forward to the next feast. 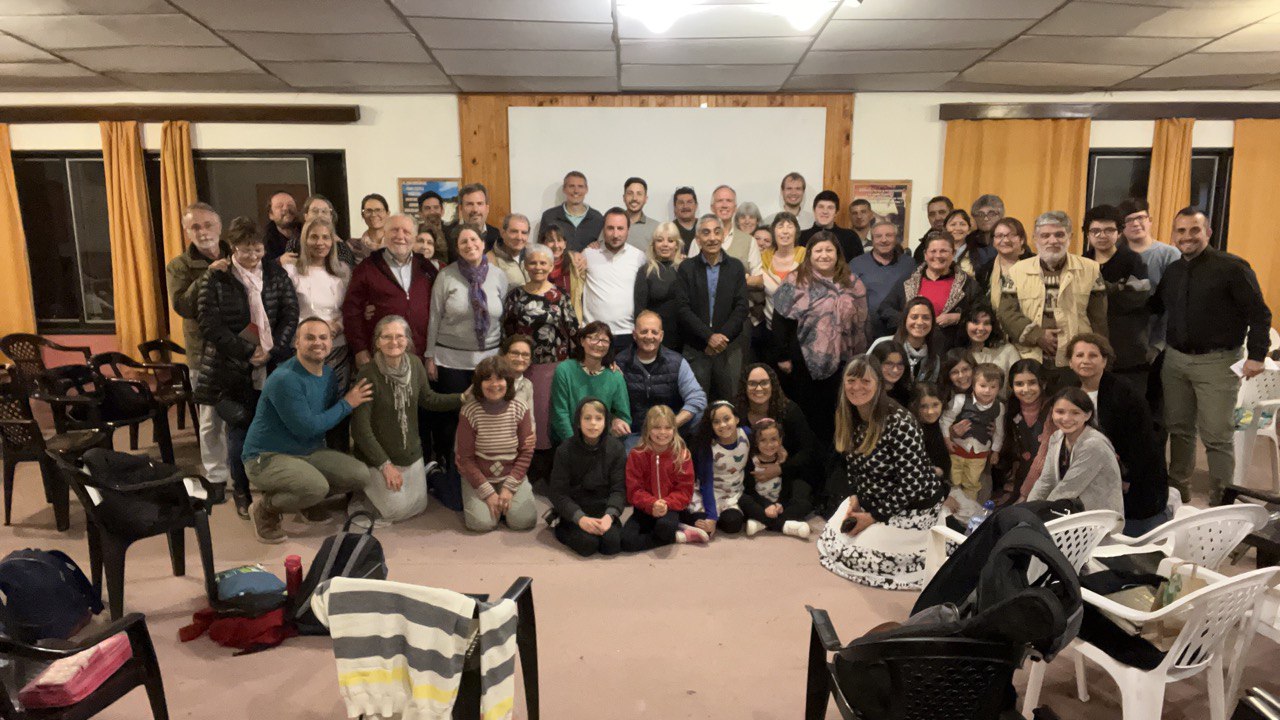 At the end of the feast, Roberto read out a message written to us by the administrators of the Baptist camp we had been using. In the message, they thanked us for “good conduct”, and said that it was clear that God’s Spirit was among our group, and that we were invited to use this venue again whenever we wanted to.

Aside from the presentations, we enjoyed beautiful fellowship through Bible study groups, the informal sharing of testimonies, eating together, and simply being and talking together. It felt extra-special to have the presence of elder Buzzi from Brazil and Carlos Hernandez and his beautiful family from Puerto Rico, with their unique accents and perspectives. By the end of the meetings, several people who had arrived by bus were lovingly taken by those who had room in their cars. 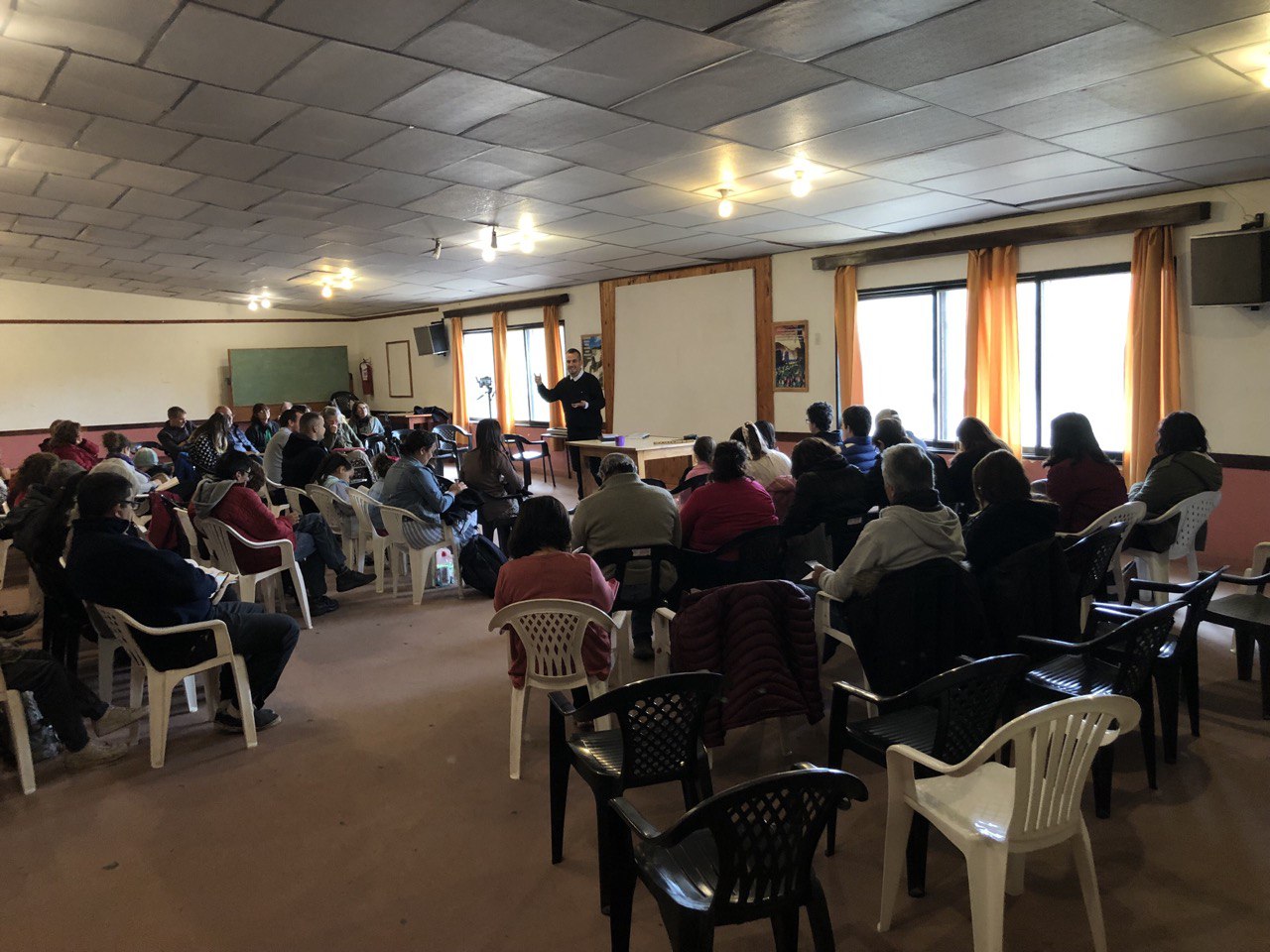 I keep thanking our Father for what we witnessed that week. It was what Daniel and I had been dreaming and praying for since we experienced our first feast at Widgee, Australia, in 2017. And now this message that we love so much has been enthusiastically embraced by several ministers in Argentina. It is no longer in our hands; it has caught fire, and if human pride doesn’t get in the way, it is the beginning of a bright shining of this truth in South America.

There are many more stories of this camp, but they are not mine to share, so I will stop here. I hope this blesses you and brightens your heart. Praise Father that the message of His true character of love is beginning to spread! 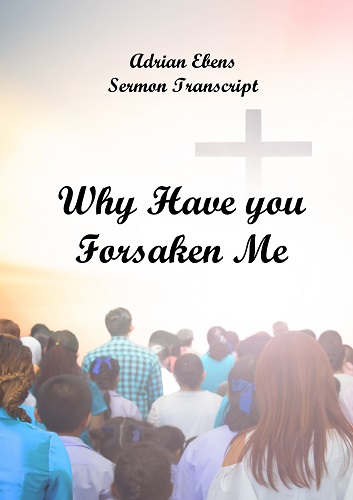