When considering the Sonship of Jesus Christ, we are immediately faced with a perplexity. Reading the Bible at face value we find that the Son is presented as both eternal and begotten.

Christ is Eternal
Mic 5:2  But thou, Bethlehem Ephratah, though thou be little among the thousands of Judah, yet out of thee shall he come forth unto me that is to be ruler in Israel; whose goings forth have been from of old, from everlasting.

Joh 8:58  Jesus said unto them, Verily, verily, I say unto you, Before Abraham was, I am.
Note: The reference to I AM is one who is in a state of perpetual existence.

Christ is Begotten
Heb 1:2-4  Hath in these last days spoken unto us by his Son, whom he hath appointed heir of all things, by whom also he made the worlds; Who being the brightness of his glory, and the express image of his person, and upholding all things by the word of his power, when he had by himself purged our sins, sat down on the right hand of the Majesty on high; Being made so much better than the angels, as he hath by inheritance obtained a more excellent name than they.

Joh 1:18  No man hath seen God at any time; the only begotten Son, which is in the bosom of the Father, he hath declared him.

Joh 3:16  For God so loved the world, that he gave his only begotten Son, that whosoever believeth in him should not perish, but have everlasting life.

Joh 8:42  Jesus said unto them, If God were your Father, ye would love me: for I proceeded forth and came from God; neither came I of myself, but he sent me.
Note: The word proceeded forth means to issue or come out of

When we try to put these two labels together in our minds Eternal and Begotten Son they don’t seem to fit.

Fitting these two labels together is a key component of understanding the Son of God.

This is where we get a common line of reasoning from many Trinitarians:
1.    Christ could not come forth from the Father as a Son because then he would not be eternal.
2.    This would mean that there was a time when Christ did not exist
3.    Such a suggestion indicates a denial of his divinity
4.    Therefore Christ could not be begotten in eternity.

monogen?s only born, that is, sole: - only (begotten, child).

So then there are two ways that people usually deal with begotten
5.    Jesus was begotten in His incarnation (when He came to earth)
6.    Jesus was spiritually begotten in eternity which means he stepped into the role of a Son, but is not actually a literal son.

In either case the identity of Christ is changed to no longer be a true and literal Son. His real identity becomes unknown with the label of Second person of the Godhead. There is no concept of relation between Father and Son except that of equality of power and eternity. That is all we can really grasp they are both eternal power. See Who are these three beings for more detail.

So in this line of reasoning, the resolution of the terms Eternal and Begotten Son is to turn the true identity of the label begotten Son into a mystery. By mystery, I mean His identity as a Son becomes a mystery.

Within this reasoning process, no attempt has been made to define the term eternal or eternity. The assumption is simply made that eternity is an infinite expansion of time that goes on forever. 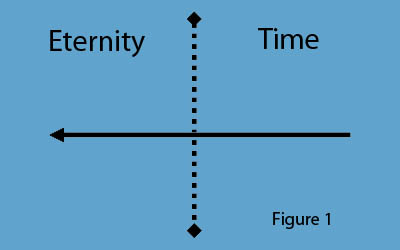 One of the interesting things about this process is that time ends up being constant and Christ is the one who changes. In this scenario who is subject to who?

On what basis do we make the assumption that time is constant? What does the Bible word everlasting or eternal actually mean?

From H5956; properly concealed, that is, the vanishing point; generally time out of mind (past or future), that is, (practically) eternity; frequentative adverbially (especially with prepositional prefix) always: - always (-s), ancient (time), any more, continuance, eternal. 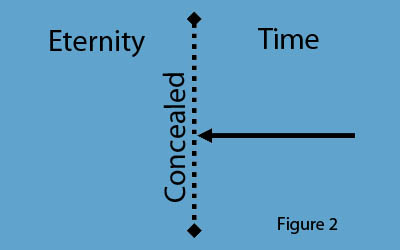 Deu 29:29  The secret things belong unto the LORD our God: but those things which are revealed belong unto us and to our children for ever, that we may do all the words of this law.

The Bible defines eternity as something that is concealed, God has not revealed it to us, it is beyond our comprehension. To impose our finite concept of time upon eternity is an attempt to look into things that God never intended us to understand.

The concept of time is constant for us as human beings. If we force this concept upon eternity are we not projecting human conditions onto the Godhead. Is it possible that this is a form of idolatry to make the Son of God an extension of ourselves. If we live in time then the Son must live in time, He must be like us.

It is completely absurd to measure Christ by something that He has made. The Bible says that all things were made by Christ and without Christ nothing was made that is made. John 1:3. This includes time.

Rather than turn the identity of the Son of God into a mystery why can we not allow eternity to be a mystery? If we do this and restrict ourselves to our finite existence, then the terms Eternal and Begotten Son find complete harmony. We only have difficulty when we presume to reach into the mystery of eternity, something that God never revealed to us.

I would hasten to add that the process of how Christ became a Son is certainly a mystery. It is totally beyond us to understand how God does any of these things, but we are talking about the Identity of the Son - this is not a mystery, it has been revealed to us by God that Christ received everything from God and that makes Him a Son. On the other hand God has not revealed to us what eternity is or how it functions - it is a mystery.

This is the only way that we can truly say that Christ is the same yesterday, today and forever. We must allow Christ to be constant and time and eternity to be alterable.

A failure to do this causes the destruction of the Begotten Son from eternity and that my friends is exactly what Satan has desired from the Beginning.

So where will you place the mystery? On the label Begotten Son or on Eternity?