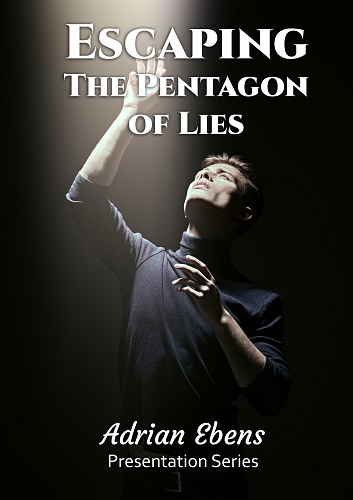 Divine Pattern of Life
We recommend reading this book first if you have not already.

As You Judge
We recommend this book for further reading.

The Escaping the Pentagon of Lies Presentation series was the crystallization of a stream of truth that had been developing since September of 2001. It brought together the key doctrinal framework that enables the soul to escape Satan’s masterpiece of deception designed to destroy Christians seeking eternal life.

This series has opened the door for many people to a new reality in their Christian experience and has laid the foundations for a worldwide movement dedicated to freedom from the bondage that we feel in this world.

This series took place in the USA immediately after a vital discovery that was made during the Feast of Tabernacles while in a beautiful German Forest. The mirror principle connected to the two covenants opened up the stories of the Old Testament that appeared to present God as violent and destructive. We wish you abundant blessings as you consider this series. May the door open for you as it has for many others.