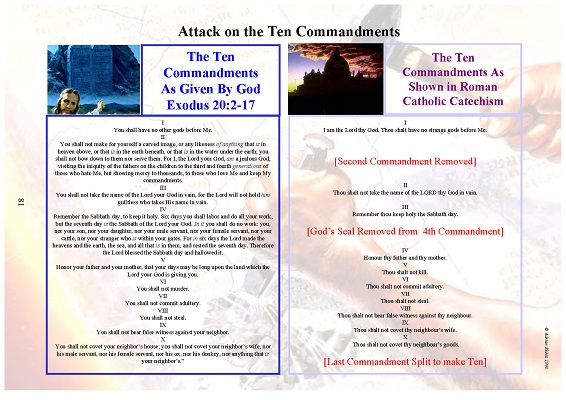 Many people are surprised that there are at least two versions of the Ten Commandments. The true version is found in the scriptures, The altered one is found in the Roman Catholic Catechism. The alterations are very significant and bear investigation. The wording of the first commandment is changed from “No other gods” to “No strange gods”. The second commandment has been completely removed, and the explicit day that we are to worship, the seventh-day Sabbath and the signature of the Creator God has been removed from the fourth commandment. The tenth commandment has been split into two to fill the void made by removing the second commandment. These changes remove the identity of its author. In these changes we see the hand of the antichrist “changing times and laws”.

We noticed in the chart “The kingdom of God” that the Ten commandments are a protection of our identity. They clearly outline our position in relation to God and our fellow man. In altering the commandments, our identity is attacked and we become vulnerable to the system of Babylon.