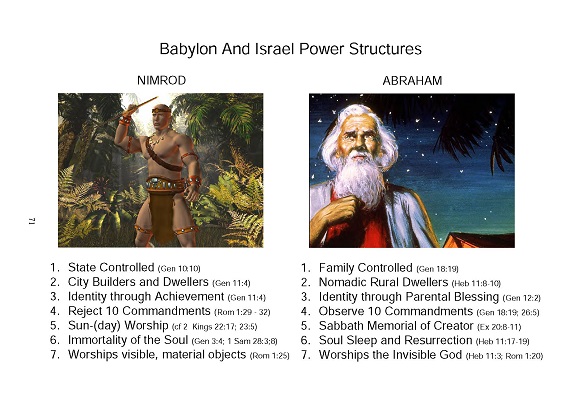 Genesis 10:10 indicates that Nimrod established his own kingdom. A kingdom must have policies on a number of key areas. We will list a few here. 1) Governance – Who governs and how 2) Currency – What do we use to trade and exchange goods and services 3) Citizenship – how a person becomes an accepted member of a community. In this chart we contrast a number of features of God’s kingdom represented in the person of Abraham and Satan’s kingdom represented in the person of Nimrod.

God’s government is based on the family system. The head of the government is the Father. The relationship between the leader and its citizens is close and intimate. This principle is developed in the chart The kingdom of God. On the other hand Satan’s kingdom is about being the strongest. Those who are the strongest are those who rule. The religion of Nimrod developed a system of God based around three individuals, Nimrod, Semiramis and Tammuz their son. These three individuals formed the basis of a Trinity based religion – three powerful individuals in their own right but working together.

In points 2 through 7, on Abraham’s side, we see some of the key factors that contribute to strengthen a family based system. Country living is more suited to family lifestyle and the fostering of family values. In Abrahams family great emphasis was focused on the blessing as especially demonstrated in the first born. The observance of the ten commandments is critical to the survival of the family and a reflection of God’s kingdom. Each command safe guards some aspect of both human and divine relationships. The Sabbath command is vital to the preservation of a family system and the protection of the channel of blessing. As a family depends wholly on the Lord to sustain them during the Sabbath hours, the principle of dependence upon established authority is strengthened and maintained. It is also a reminder that all good things come from a tender heavenly Father and we can live in gratitude and peace rather than anxiety and fear which often destroy families. The doctrine of soul sleep also affects our thinking about how dependent we are on God whereas in Nimrod’s kingdom, the concept of immortality fosters the belief of independence and self sufficiency. We can live on regardless of God. Tithes and offerings works in a similar way – it enhances our understanding of our dependence upon parental authority for life and blessing.

Some people look at the doctrines of the law and the Sabbath as a yoke or burden that restricts. Nothing could be further from the truth. These teachings support and protect the family from much of the destruction we see in families today – when they are seen in their correct place.

The kingdom of Nimrod was dominated most of the world. It is for this reason we see the demise of the family and the growth of individuals that are ripe for the kingdom of Babylon. The lack of parental blessing and security within homes has led to generations of individuals that seek the lost blessing through their achievements and successes. This situation will prepare the way for the final conflict between those who worship the beast and his image and those who worship Him that made the heavens and the earth.