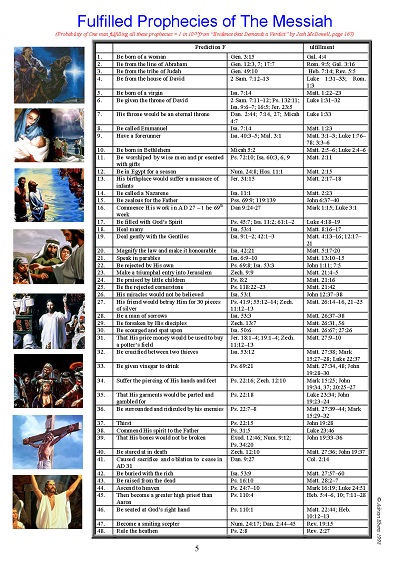 AIM: To show the absolute assurance that Jesus is the Messiah and therefore the Bible is reliable.

Outline: Here is some of the highlights from the many prophecies listed

Not only was Jesus to be born (Jesus may have just appeared as an adult) but also He was to be born of a virgin. This is impossible except where God is concerned. Luke 1:37.

How many people do you know that have decided the place where they would be born? If you were going to attempt to be the Messiah you would have to know your birthplace because the Bible says that the Messiah would be born in Bethlehem Ephratah. Ephratah clearly identifies the Bethlehem where Jesus was born, since there was more than one Bethlehem in Israel.

Daniel says that it would be 69 prophetic weeks from the beginning of the command to restore and build Jerusalem until Messiah the Prince – the point at which Jesus was baptised. Mark 1:15 says the time (or prophecy) is fulfilled. Jesus began his work exactly when it was predicted. You need to have a good grasp of the seventy-week prophecy if you want to share this point.

To think that the person the Jews had waited so long for, they ended up rejecting. This is an important prophecy in terms of explaining why the Jews are still waiting for a Messiah and why Jesus was crucified.

The exact details of Jesus’ death are described in the Old Testament. He was sold for thirty pieces of silver; forsaken by His disciples, spat upon, crucified; His garments were gambled over. Such incredible accuracy predicted hundreds of years before the event. This is compelling evidence that Jesus is indeed the Messiah and that the Bible is 100% trustworthy.