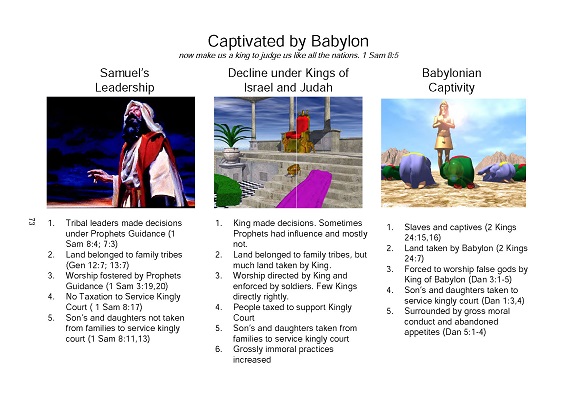 Under the leadership of Samuel, Israel maintained a high degree of autonomy and freedom. The Israelites were still led by parental, tribal leaders and guided by the prophet. Satan tempted the Israelites to desire to be like the other nations that had patterned themselves on the principles of Nimrod’s kingdom principles. Samuel warned the people with these fearful words:

And he said, This will be the privilege of the king who shall reign over you. He shall take your sons and appoint them for himself, for his chariots, and his horsemen. And they shall run before his chariots.

And he will appoint commanders over thousands, and commanders over fifties, and some to plow his ground and reap his harvest, and make his weapons of war and weapons for his chariots.

And he will take your daughters to be perfumers and cooks and bakers.

And he will take your fields and your vineyards and your olive-yards, the best, and give them to his servants.

And he will take the tenth of your seed and of your vineyards, and give it to his eunuchs and to his servants.

And he will take your male slaves and your slave girls, and your finest young men, and your asses, and put them to his work.

But the people refused to listen. Rom 6:16 says to whom you yield yourselves servants to obey – His servants you are! Israel prepared themselves to become servants and slaves to Satan. The transferral from Parental leadership to Kingly leadership removed the element of paternal affection and this led to Israel’s downfall. This prepared them to become slaves to Babylon.

It is worthy to note that God’s people are not Babylon but their hearts are captivated by her system of government which is a system of death. God’s remnant church is not Babylon but we often emulate her in desire for kingly power and displays of pride. For this very reason God warns the church of Laodicea – You think you are rich and increased with goods and have need of nothing but you are wrong! May we heed the warning and humble ourselves before God