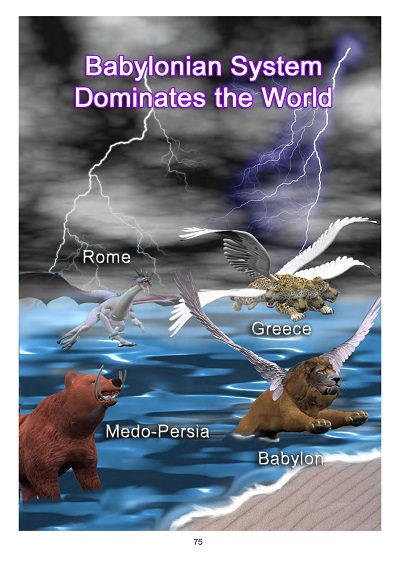 Daniel 7 outlines for us in breath taking detail the incredible system of Nimrod’s system of government. The people of the city of Babylon, the first city that Nimrod built, rose to a level of power not seen by any nation before it. Babylon captured Jerusalem in 606BC and carried their finest young people to Babylon to teach them their governmental system and worship. Daniel and his three friends faced a spiritual and mental battle to remain faithful their invisible Creator God. The foundations of Nimrod’s government always ensure its downfall and Babylon (The Lion) ruled by Nebuchadnezzar and his sons came to an end in 539BC when Medo-Persia (The Bear) animated by the same thirst for greatness and power took world dominion and continued to refine and develop Nimrod’s government system. Medo-Persia was replaced by Greece (The Leopard) in 331 BC. Greece further developed the Babylonian system and refined many features of science, art, recreation, education and government to enhance Nimrod’s kingdom system. Most of the features introduced by Greece are present with us today and the Bible portrays the Beast of Revelation 13 as predominately leopard like. Its influence and affect on the minds of men and women has been the greatest in terms of seducing minds into the Babylonian system. Greece was eventually toppled by Rome in 168BC and perfected the system that previous three kingdoms had worked on. Through these four kingdoms Satan perfected his system of government. The coming of Christ and the evangelism of the disciples nearly brought the kingdom of Rome to its knees. Regardless of how many Christians Rome killed the more they came. Constantine realised he could not beat the Christians and with Satanic genius he embraced the Christian Church and made it his own. During the dark Ages, the Babylonian system took the name of Christ (The Little Horn) and ruled the world with even greater power. Only God could stop this system and this is where the Judgement is mentioned. God would judge this parading impostor claiming to be God’s representative and cast her into the lake of fire.