This has long been an interesting question. I would like to share with you a little history and share a letter and a few quotes from Ellen White to shed some light on this question.

At a council meeting at Avondale School, about the year 1893, there were present Elders Haskell, F.L.H. Baker, G.B. Starr, and their wives, and Sister E.G. White, also W.A. Colcord, who was the editor of the Australian Signs of the Times.

Elder Colcord requested the privilege of reading some articles regarding the personality of Melchisedec. We all listened as he read and were surprised that Sister White listened also, with seeming interest, as she was not accustomed to listening to any argumentative writings.

As Elder Colcord was reading, Sister White interrupted him, saying: “Elder Colcord, I would not publish these articles, if I were you.” “Why not?” He inquired. “Because they are not correct.” She answered.

He then asked, “Who then was Melchisedec?”

This is what they claim Ellen White said:

She replied, “I will tell you who Melchisedec was. He was the Holy Spirit, who took the form of humanity and represented the Lord Jesus Christ to that generation.“ 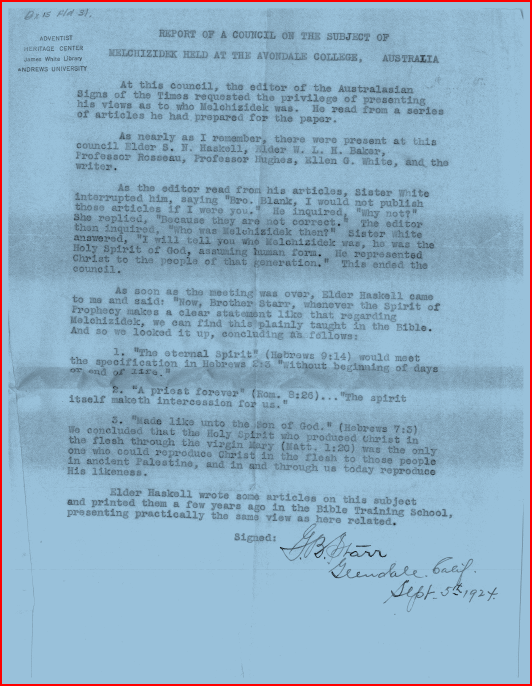 "It was Christ that spoke through Melchizedek, the priest of the most high God. Melchizedek was not Christ, but he was the voice of God in the world, the representative of the Father. And all through the generations of the past, Christ has spoken; Christ has led His people, and has been the light of the world." 1SM 409

If we left off at this point you might conclude that the Holy Spirit is a separate third person in the form of Melchizedek. Now have a look at this.

"Meanwhile, reports were brought to the rulers that Jesus was approaching the city attended by a great concourse of people. In trepidation they go out to meet him, hoping [396] to disperse the crowd by means of their authority. As the procession is about to descend the Mount of Olives, it is intercepted by the rulers. They inquire who and what is the cause of all this tumultuous rejoicing. As they, with much authority, repeat their question,--Who is this? the disciples, filled with a spirit of inspiration, are heard above all the noise of the crowd, repeating in eloquent strains the prophecies which answered this question. Adam will tell you, It is the seed of the woman that shall bruise the serpent's head. Ask Abraham, he will tell you, It is Melchisedek, King of Salem, King of Peace. Jacob will tell you, He is Shiloh of the tribe of Judah. Isaiah will tell you, Immanuel, Wonderful, Counsellor, the Mighty God, the everlasting Father, the Prince of Peace. Jeremiah will tell you, The Branch of David, the Lord, our righteousness. Daniel will tell you, He is the Messiah. Hosea will tell you, He is the Lord God of Hosts, the Lord is his memorial. John the Baptist will tell you, He is the Lamb of God who taketh away the sin of the world. The great Jehovah has proclaimed from his throne, This is my beloved Son. We, his disciples, declare, This is Jesus, the Messiah, the Prince of Life, the Redeemer of the world." 2SP 395,396

In this quote Ellen White says that Christ is Melchizedek. But doesn't that create a contradiction? Not in the light of this passage:

"Cumbered with humanity, Christ could not be in every place personally; therefore it was altogether for their advantage that He should leave them, go to His father, and send the Holy Spirit to be His successor on earth. The Holy Spirit is Himself divested of the personality of humanity and independent thereof. He would represent Himself as present in all places by His Holy Spirit, as the Omnipresent." 14MR

If the Holy Spirit is a third separate person then Ellen White contradicts herself in the above passages. When understood as the Spirit of Christ, everything harmonizes.