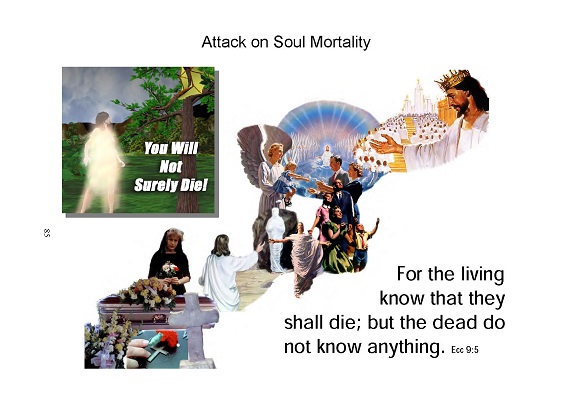 From the very inception of Sin, Satan has taught us that “we shall not surely die” (Gen 3:5) if we disobey God. This suggests that human beings have some form of life source or power in themselves. This teaching entered the Christian church as the doctrine of the immortality of the soul. A belief in the immortality of the soul is one of the key pillars of Babylon. It suggests a level of independence from God that either allows us to ignore God and do our own thing or seek to obey God’s requirements with the power we have inside of us. A belief in immortality is directly linked to a belief in salvation by works, because it suggests we have power inherent in us to add to God’s work of salvation. In a similar way, the doctrine of immortality also contributes to the belief in value by performance and achievement. The combination of the doctrine of immortality and the rejection of the Sabbath commandment is a deadly combination that renders the teaching of righteousness by faith almost powerless. It helps force the issue into a performance/non performance debate and confuses the wonder of Christ in you the hope of glory.

The doctrine of immortality forces God to appear as completely unjust and heartless. Man supposedly has a power that not even God can destroy and so those who reject Him must burn in an agonising fire for all eternity. This is not justice, this is evil beyond comprehension. Will the saints hold their eyes and close their ears to block out the sheiks of the wicked as they roll in the flames? The thought is utterly repulsive and Satanic. Since many Christians actually believe that God will do this to people, they are in danger of reflecting the god they worship – A heartless ruthless dictator. Heaven becomes a fire escape and their religion is dominated by fear. How many have rejected this false god as the God of the Bible, only eternity will tell.